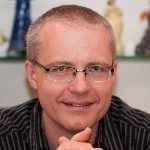 I received my B.S. in Physics from St. Petersburg State University, Russia. I went to graduate school at Caltech, and received my Ph.D. in Mathematics under the guidance of Barry Simon.  My Ph.D. work was on quantum scattering, and tools of Fourier analysisthat were novel in this context. My last year at Caltech had been supported by Alfred P. Sloan Dissertational Fellowship. I continued my research at Mathematical Sciences Research Institute at Berkeley, where I started to collaborate with Michael Christ. Our collaboration produced a series of works on spectral theory of Schroedinger operators, exploring and building links with classical Fourier analysis questions of almost everywhere convergence for multilinear integral operators.

The next five years I spent at the University of Chicago, first as Dickson Instructor and then Assistant Professor. During these years, my research interests expanded significantly to include models of combustion processes, in particular reaction-diffusion equations. The main subject of my work at Chicago (joint with Peter Constantin and Lenya Ryzhik) has been investigation of the effect fluid flow can have on mixing, reaction enhancement, and quenching. Some of the work was done in interdisciplinary collaboration with Robert Rosner’s group in the Astrophysics department. I have also continued to work on Schroedinger operators at Chicago, in particular solving one of the fifteen "twenty first century" problems of Barry Simon.

From Chicago, I moved to the University of Wisconsin-Madison as a tenured Associate Professor, and was soon promoted to full Professor. At Madison, I continued research on reaction-diffusion and mixing, and expanded my interests to fluid mechanics and mathematical biology. My research in fluid mechanics focuses on a class of equations called active scalars, which play an important modeling role in many applications.  These equations are nonlinear and nonlocal, which makes their analysis challenging. My work focuses on the development of new techniques to better understand properties of solutions to active scalar equations.  My paper on surface quasi-geostrophic (SQG) equation from atmospheric science (joint with Fedor Nazarov and Alexander Volberg) has been profiled as a fast-moving front paper (highly cited) by Thomson Reuters in 2010. The mathematical biology direction of my research is very recent and truly interdisciplinary. Jointly with Lenya Ryzhik, we study the role of chemotaxis (attraction of biological cells by concentration of a chemical) in ecology. This research was stimulated by a talk on coral life cycle by oceanographer Jeffrey Weiss that I attended at the interdisciplinary workshop in Minnesota. Our first results suggest that chemotaxis may play a crucial role in survival of many marine organisms, and needs to be included in models of marine ecosystems. The support of the Guggenheim Foundation will allow me to devote more time to research in active scalars and mathematical biology.

My research at Chicago and Madison has been recognized by a National Science Foundation Career award, A.P. Sloan Foundation fellowship, and invitations to lecture at many prestigious meetings, including the International Congress on Mathematical Physics in 2006 at Rio de Janeiro, Brazil, the plenary talk at the 12th International Conference on Hyperbolic Problems, Maryland, 2008, and the plenary talk at the AMS Central Section Meeting, Waco, Texas, 2009.

Teaching and mentoring has always been an important part of my career. I have taught a variety of undergraduate and graduate courses from basic calculus lectures with 200 students to graduate-level courses. Currently, jointly with Roquejoffre and Ryzhik, I am working on a monograph covering some of the elegant storylines in partial differential equations and applications—to attract more talented young people to science and facilitate their training. What I strive for in my career is to produce high-quality mathematical research that is both relevant in applications and involves rich and beautiful mathematics. Then it is only natural to try to share the feeling of this beauty and power with younger generations.