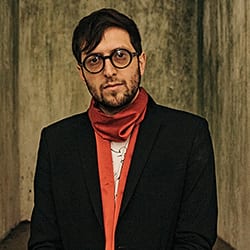 David Hertzberg is a composer from Los Angeles. In April 2020, the debut recording of his opera The Wake World will be released on Tzadik. Co-presented by Opera Philadelphia and The Barnes Foundation in the fall of 2017, The Wake World went on to win the Music Critics Association of North America's Best New Opera Award. Of the premiere, The New York Times wrote: “The score, spiked with modernist elements, makes Mr. Hertzberg seem a 21st-century Ravel.” The spring of 2018 saw yet another opera premiere, The Rose Elf, inside the catacombs of Green-Wood Cemetery in Brooklyn, which WQXR named The Opera Event of 2018, saying: “Hertzberg is a masterful dramatist... This one signals the arrival of a major compositional personality.” Recent seasons have included his Chamber Symphony with the American Composers Orchestra at Carnegie Hall, the cantata Sunday Morning with New York City Opera at Lincoln Center, and Spectre of the Spheres with the Pittsburgh Symphony. Recent distinctions have come from MacDowell, Yaddo, and the American Academy of Arts and Letters. He served as Composer in Residence for Opera Philadelphia and Young Concert Artists, and studied at The Juilliard School and the Curtis Institute of Music. Photo Credit: Kevin Condon