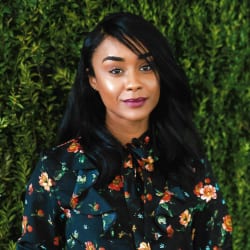 A.V. Rockwell is an award-winning screenwriter and director from Queens, New York. Acknowledged as a "rising indie filmmaker" by Entertainment Weekly, her work which includes the short film collection Open City Mixtape, has been celebrated for its brutal yet poetically humanized depictions of urban life. Her narrative short KIDS, screened at Telluride Film Festival, was described by Indiewire as “…one of those types of bold, stylistically and visually powerful pieces that leave you yearning to see more.” The distinctive voice that dominates her work slyly addresses issues of race, family, identity, and systematic oppression.

Rockwell was invited to study at the prestigious graduate film program of NYU Tisch School of the Arts where she was awarded full scholarship as a Dean’s Fellow. She was also handpicked to direct The Gospel, a music-driven short film commissioned by singer/songwriter Alicia Keys. Presented as a visual prelude to Keys' sixth studio album Here, it would go on to premiere at Tribeca Film Festival and be named a pop critic pick on The New York Times' column, The Playlist. She was most recently named the winner of the 2016 Tribeca CHANEL Through Her Lens women filmmakers fellowship. Currently, Rockwell resides in New York City where she is developing her first feature-length narrative film and preparing to make her next directorial effort, Feathers.