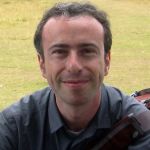 Aaron Einbond’s work explores the intersection of instrumental composition, sound installation, field recording, and technology, bringing the spontaneity of live performance together with computer interactivity to impact and challenge the listener. His recent work has focused on audio recording not only as a means of documentation, but as the center of a creative process bridging improvisation, notation, and interpretation, and questioning the thresholds of perception between instrument, stage, room, and loudspeaker. He has received awards and commissions from the Fromm Music Foundation, the American Academy of Arts and Letters, BMI, ASCAP, Meet the Composer, the French American Cultural Exchange, the Internationales Musikinstitute Darmstadt, the Hochschule für Musik Franz Liszt Weimar, as well as a Fulbright Scholarship, a British Marshall Scholarship, and Berkeley’s Georges Ladd Prix de Paris.

He was born in New York in 1978 and has studied at Harvard, Cambridge, the Royal College of Music London, the University of California Berkeley, and IRCAM in Paris with principal teachers Mario Davidovsky, Julian Anderson, Edmund Campion, and Philippe Leroux. From 2009 to 2011 he was Mellon Postdoctoral Fellow in Music at Columbia University and in 2012–2013 he is Research Fellow at the University of Huddersfield, UK.

As a researcher in computer music he has presented his work at the International Computer Music Conference and Society for Music Theory, and taught masterclasses at the conservatoires of Nice, Blanc-Mesnil, and CNMAT in Berkeley. As an electronic-music producer and improviser he has performed with the San Francisco Contemporary Music Players, Ensemble Aleph, Ensemble Cairn, the American Composers Orchestra, Qubit, and SonicExchange Kassel.

Upcoming projects include a Giga-Hertz Prize commission from ZKM for a new work for piano, percussion, and electronics produced at the SWR Experimentalstudio in Freiburg; a musical research residency at IRCAM on computer tools for timbre and improvisation; and a CD with Ensemble Dal Niente to be released on Carrier Records in New York.

What the Blind See