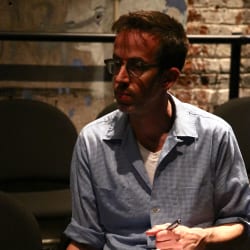 New York City-based theater artist Aaron Landsman makes performances and other projects using people, language, space and time. He often starts with questions: how does technology affect the ways we remember? How do we perform power, and who gets to play which roles? Can the person who made you who you are, be the person who messed you up, be the person you forgive now?

Landsman’s current projects include: Perfect City, a 20-year art and activism project about city planning, urban policy, and displacement, created with planners, activists, students and artists; Empathy School/Love Story, a diptych of monologues about landscape, nostalgia, memory and class (NY Times and Time Out New York Critics’ Pick); and SQUARES, a performance created in collaboration with photographer Paul Shambroom, director Mallory Catlett and designer/director Jim Findlay, and drawn from 584 anonymous cast-off snapshot from a Midwestern photo lab in the 1970s. From 2012-2014, Landsman, Catlett and Findlay presented the participatory performance City Council Meeting in five US cities. They are now working on a book about the project with the University of Iowa Press.

His earlier works were commissioned and presented by EMPAC, The Foundry Theatre, DiverseWorks, The Chocolate Factory, PS122 and other venues. His writing has been published in Theater, Clackamas Literary Review, Painted Bride Quarterly, Mudfish, Hobart, and as part of the anthology Innovation In Five Acts, published by TCG. Landsman was a 2014-16 Princeton Arts Fellow, the 2014-2016 ASU Gammage Residency Artist, and a 2010-13 HERE Resident Artist. He has performed with Elevator Repair Service, Richard Maxwell, Tory Vazquez, Andrea Kleine and many other artists. He is a playwright in residence at Abrons Arts Center, and a Visiting Associate Professor at Princeton.

Running Away From The One With The Knife (excerpts/interview), presented at The Chocolate Factory Theater, March 2015. Written by Aaron Landsman, directed by Mallory Catlett, designed by Jim Findlay and Christopher Kuhl, performed by Kate Benson, Juliana Francis-Kelly and James Himelsbach. Videographer: Peter Richards