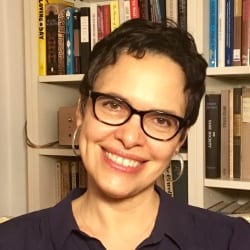 Ada Ferrer is Julius Silver Professor of History and Latin American and Caribbean Studies at New York University. She holds an AB in English from Vassar College, an MA in History from the University of Texas at Austin, and a PhD in History from the University of Michigan (Ann Arbor). She is a specialist in the history of Cuba, the Caribbean, and Latin America, as well as on the comparative and transnational histories of slavery, freedom, and revolution.

Ferrer is the author of Insurgent Cuba: Race, Nation, and Revolution, 1868-1898 (University of North Carolina Press, 1999), which won the Berkshire Book Prize for the best first book written by a woman historian in any field. Her second book, Freedom’s Mirror: Cuba and Haiti in the Age of Revolution (Cambridge University Press, 2014), won the Frederick Douglass Book Prize from Yale University’s Gilder Lehrman Center for the Study of Slavery, Abolition, and Resistance; the Haiti Illumination Prize from the Haitian Studies Association, and three prizes from the American Historical Association: the Friedrick Katz Prize for the best book on Latin America, the James Rawley Prize in Atlantic World History, and the Wesley Logan Prize in the history of the African Diaspora.

Ferrer is co-curator (with Édouard Duval Carrié) of Visionary Aponte: Art and Black Freedom, a contemporary art exhibition based in part on Chapter 7 of Freedom’s Mirror, as well as co-curator (with Linda Rodríguez) of the digital humanities website Digital Aponte.

Ferrer is finishing a book tentatively titled Cuba: An American History to be published by Scribner. Based on over thirty years of research in Cuban, Spanish, and US archives, it is a sweeping, character-driven narrative of more than 500 years of Cuban history, reconceived and written for a moment when history itself seems up for grabs.