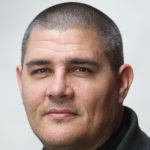 He has been the recipient of a Swarthout Writing Award, a Kingsbury Fellowship, a Stegner Fellowship, a Whiting Writers’ Award, and a National Endowment for the Arts Fellowship. His fiction has appeared in Esquire, Harper's, Playboy, Paris Review, Granta, Tin House, The New York Times, and Best American Short Stories. He is the author of Emporium, a short-story collection, and the novels Parasites Like Us and The Orphan Master's Son. His books have been translated into sixteen languages.

Adam Johnson is currently Associate Professor of English with emphasis in creative writing at Stanford University. He lives in San Francisco with his wife and their three children.