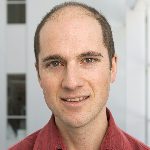 Adam Siepel is Professor and Chair of the Simons Center for Quantitative Biology at Cold Spring Harbor Laboratory. Siepel works on problems at the intersection of computer science, statistics, evolutionary biology, and genomics.  His research has touched on a diverse collection of topics, including the identification of recombinant strains of HIV, the discovery of new human genes, the characterization of the non-protein-coding "dark matter" of mammalian genomes, and the estimation of the times in early human history when major population groups first diverged.  A general theme in his work is the development of precise mathematical models for the complex processes by which genomes evolve over time, and the use of these models, together with techniques from computer science and statistics, both to peer into the past, and to address questions of practical importance for human health.

Siepel did his undergraduate work at Cornell (B.S., Ag & Bio Engineering, 1994), then worked in software development for several years in the late 1990s, first at Los Alamos National Laboratory and then at the National Center for Genome Resources in Santa Fe.  Seeking deeper knowledge of computer science, he completed a Master's degree in his spare time (University of New Mexico, 2001), then decided to return to academia to complete his Ph.D.  His career took a turn when he decided to join Prof. David Haussler's laboratory at UC Santa Cruz, where he studied molecular evolution and statistical machine learning, and became heavily involved in genomics.  His work with Dr. Haussler earned him a position on the faculty at Cornell, where he has been since 2006.  His research at Cornell and UC Santa Cruz has produced more than 60 peer-reviewed research articles, including several widely cited papers in genomics and molecular evolution.

Siepel is a winner of a Microsoft Research New Faculty Fellowship, a Packard Fellowship, a Sloan Fellowship, and a National Science Foundation CAREER Award.  In addition to running an active research lab at Cornell, he teaches courses in computational genomics and machine learning, directs Cornell's graduate program in Computational Biology, and serves as an associate director for the Cornell Center for Comparative and Population Genomics (3CPG).