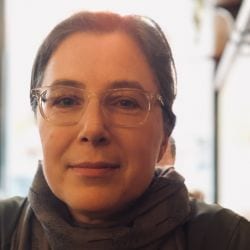 Adriana Petryna is the Edmund J. and Louise W. Kahn Term Professor in Anthropology at the University of Pennsylvania. In her ethnographic studies in Eastern Europe and the United States, she probes the socio-political nature of science, how populations are enrolled in experimental knowledge-production, and what becomes of citizenship and ethics in that process. She is the author of the award-winning books Life Exposed: Biological Citizens after Chernobyl (Princeton University Press 2002) and When Experiments Travel: Clinical Trials and the Global Search for Human Subjects (Princeton University Press 2009), and co-editor of Global Pharmaceuticals: Ethics, Markets, Practices (Duke University Press 2006) and When People Come First: Critical Studies in Global Health (Princeton University Press 2013). Her explorations of biological citizenship, ethical variability, and experimentality have advanced the social scientific study of nuclear disaster aftermaths, human subjects research, and global health. With the Guggenheim Fellowship, Petryna will complete a manuscript tentatively entitled What is a Horizon? Abrupt Climate Change and Human Futures, offering an account of abrupt environmental shifts and the challenge of emergency response, especially to wildfire. She draws the reader into what she calls horizoning work, or the daily labors of scientists and emergency responders as they confront rapid shifts in established ecological baselines and craft operational footholds in stressed and flammable worlds.

Born in Cleveland, Ohio, Petryna studied architecture at the University of Michigan, Ann Arbor and received her Ph.D. in Anthropology from the University of California, Berkeley. Her book, Life Exposed: Biological Citizens after Chernobyl, received the Sharon Stephens First Book Prize from the American Ethnological Society and the New Millennium Book Award from Society for Medical Anthropology. In 2014, her body of work was awarded the Royal Anthropological Institute’s Wellcome Medal for Anthropology as Applied to Medical Problems from the Royal Anthropological Institute. At the University of Pennsylvania, Petryna directs the MD-PhD program in Anthropology and the undergraduate program in Medical Anthropology and Global Health. Her research has been supported by the National Science Foundation, the National Endowment for the Humanities, the Wenner-Gren Foundation, and the School for Advanced Research. She was a Member of the School of Social Science at the Institute for Advanced Study and a Faculty Fellow at Princeton University’s Center for Human Values.