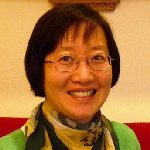 Agnes Weiyun He is a  Professor of Applied Linguistics and Asian Studies at Stony Brook University. She received her B.A. in English from the Beijing Foreign Languages Institute (now Beijing Foreign Studies University, China), Diploma-in-Education from the National Institute of Education (Singapore), M.A. in English as a Second Language from the University of Arizona (U.S.), and Ph.D. in Applied Linguistics from UCLA (U.S.). Prior to joining the faculty at Stony Brook University, she taught in the Department of Linguistics at Southern Illinois University for three years. The bilingual life Agnes He leads in Chinese (her native tongue) and English (to which she was first exposed at the age of ten) makes her realize that every language embodies a set of sensibilities and experiences, which are at once both universal and culture-specific. Language as a system (consisting of sounds, words, word orders, patterns of speaking) cannot be separated from language as a way of being; to learn and to use an additional language is to be socialized into additional ways of speaking, additional identities, and additional world views. Much of her research is devoted to a disciplined and rigorous study of how the usage of vocabulary and grammar is intricately motivated by contextual and co-textual contingencies, how everyday human interaction constructs culture on a moment-by-moment basis, and how language functions as a resource for being, for doing, and for growth and change. Rather than examine a single linguistic feature or level, her efforts have been to investigate how multiple elements of language—from lexicon to syntax, from allocation of speaking turns to conversational sequential organizations—work together in discourse to bring about real-world consequences. Such an epistemological and methodological orientation has led her to research on discourse in several domains: academic counseling encounters, second/foreign language oral assessment interviews, and, in the last ten years, the socialization and acquisition of Chinese as a heritage language. The Guggenheim Fellowship enables her to start working on a book project which will be a culmination of her thinking and writing in the last decade. Her goal is to unravel how the acquisition, attrition, re-acquisition, and maintenance of Chinese as a heritage language take place as the speaker moves across different times and different settings. This book will fill a gap in existing research on heritage language by providing a qualitative, data-based, culturally situated, and interactionally enriched account of language and cultural development. This book should engage scholars, students, as well as the general public who are interested in the relationship between language, culture, and identity, between linguistic rootedness and global citizenry, as well as between family heritage and individual aspiration. At a societal level, this book will be an effort to overcome the neglect of heritage languages in the United States and to help recognize, understand, appreciate, preserve, and develop the heritage-language resources of this country.