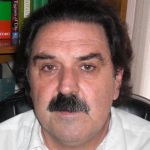 Alberto A. Iglesias is a Professor of Biochemistry at National University of Litoral (UNL) and Principal Investigator from CONICET at the Institute for Agrobiotechnology (IAL) in Santa Fe, Argentina. His work is focused on enzymology, mainly the characterization of enzymes involved in carbon, energy, and redox metabolism in plant, protozoa, and bacteria. His studies seek to understand the kinetic and regulatory properties of enzymes in the framework of metabolic scenarios and analyzing changes operated in proteins during evolution. During his Guggenheim term, Mr. Iglesias will be conducting research to identify, at the molecular level, odd characteristics of glycogen metabolism in some specific bacteria.

He received an undergraduate degree and his Ph.D. in biochemistry from the National University of Rosario (UNR, Argentina). His doctoral thesis, entitled “Purification and Characterization of Enzymes Fixing Carbon Dioxide,” was completed at the Centre for Studies in Photosynthesis and Biochemistry (CEFOBI, CONICET). He carried out postdoctoral studies for one year at the Institute of Plant Biochemistry and Photosynthesis (University of Seville, Spain). Later, Dr. Iglesias spent three and a quarter years as a Research Associate at the Department of Biochemistry and Molecular Biology, Michigan State University (E. Lansing, MI, USA). He has been a member of the CONICET Investigator Career tract since 1987 and was Director of the Institute of Technology Chascomús (INTECH) during 1995-1999. He was appointed Adjunct (1987-1989) and Associate Professor (1993-1995) at UNR and Associate Professor at UNL (2000-2008).

Alberto Iglesias has published more than ninety papers in prestigious international scientific journals and book chapters. He also co-authored a book on metabolic engineering and published articles for divulgation and education in biochemistry in recognized journals. He has served as the head of the Plant Biochemistry Section of the Committee of the Argentine Society for Research in Biochemistry and Molecular Biology (SAIB). He received travel awards from the American Society for Biochemistry and Molecular Biology (ASBMB) in 1999 and 2000. He also received the Bernardo A. Houssay 2002 award from the Argentine Society of Biology for being co-author of the work “Kinetic, Regulatory and Structural Characterization of Non Phosphorylating Glyceraldehyde-3-phosphate Dehydrogenase (GAPN) from Heterotrophic Plant Cells. News about the regulation of glycolysis.”