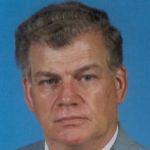 Alberto C. Riccardi is a Researcher for the Argentine National Research Council since 1972, and is a Professor (1986- ) and Head of the Invertebrate Palaeontology Division (1976- ) at the National University of La Plata (NULP), Argentina.  Previously, he worked for the Argentina Geological Survey (1963-68). During his years at NULP, he also worked on the Geological Survey of Canada (1980-81) and in 1989 was a Visiting Professor at McMaster University in Ontario, Canada.

He has contributed to our knowledge of the bio- and chronostratigraphy of the Jurassic of west central Argentina and of the Cretaceous of southern Patagonia, leading a team of geologists and palaeontologists working in different fields.  As a result, new information was obtained for the the Mesozoic of west central Argentina and Patagonia.  He was also worked on the the Upper Cretaceous of Canada and the Jurassic of Chile, Peru, and Mexico.  In addition, he has devoted considerable time to the study of the history of geology.