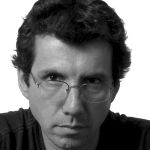 Alberto Fuguet´s first novel, Mala onda (Planeta, 1991; St Martin´s, 1997), was not a critical success but was embraced by a whole new generation of readers in Chile and, slowly but surely, in Latin America. Raised in Encino, California, Fuguet´s native tongue is English but he considers Spanish his language, which he began practicing at age eleven, once he returned to the country where he was born. Fuguet studied journalism and has been a film critic. He has also worked as a reporter and a columnist for newspapers, magazines, and radio. In 1996 he co-authored McOndo, an anthology of new, contemporary writers from South America. The main essay, based on a column of his, ignited an academic controversy that put him in the literary line of fire for his attack on magical realism and for the way he embraced global pop culture, which seeped into his novels (like the media-soaked Por favor, rebobinar; Tinta roja and The movies of my life, perhaps his most translated work). Newsweek put Fuguet on its cover in 2001, presenting him as the new face of Latin American literature. He has contributed to such American outlets such as Foreign Policy, Gear, The New York Times, Salon, and The Washington Post. His latest book in English is Shorts. He also “directed and edited” Colombian novelist and film buff Andrés Caicedo´s autobiography Mi cuerpo es una celda. He now considers himself a “narrator” and works both in films and books. He has directed Se arrienda (2005) and Velódromo (2010) and is currently editing his first English feature, Música campesina, shot entirely in Nashville. He has been a visiting professor at UCLA and Vanderbilt. His latest “non-fiction novel” is the acclaimed Missing: una investigación. Fuguet will be working on the novel Matías Vicuña, a continuation of sorts of his first book, Mala onda, set twenty-five years later, during his Guggenheim Fellowship term.