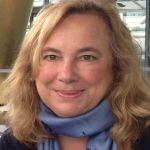 Alexandra K. Wettlaufer is Professor of French and Comparative Literature at the University of Texas at Austin, where she is Trice Professor and Associate Director of the Plan II Honors Program and a core faculty affiliate in Women’s and Gender Studies.  She received her A.B. from Princeton University in comparative literature (summa cum laude), followed by an M.A. in French (1987) and a Ph.D. in comparative literature (1993) from Columbia University. A specialist in nineteenth-century French and British literature and the visual arts, she has published broadly on the relationship between painting and the novel; gender and representation; and constructions of artistic identity.  Her books include Portraits of the Artist as a Young Woman: Painting and the Novel in France and Britain, 1800–1860 (2011); In the Mind’s Eye: The Visual Impulse in Diderot, Baudelaire, and Ruskin (2003); and Pen vs Paintbrush: Girodet, Balzac, and the Myth of Pygmalion in Post-Revolutionary France (2001).  Her work has been supported by fellowships from the American Council of Learned Societies, Bourse Marandon, Mrs. Giles Whiting Foundation, Clark Art Institute, National Humanities Center, and University of Texas.  She has been recognized with several teaching awards, including the President’s Associates’ Excellence in Teaching Award (2000) and the Blunk Memorial Professorship for Excellence in Teaching and Advising (2007–2008).  Outside of research and teaching, she has been actively involved with numerous scholarly associations: she has served on the Executive Council of the MLA and on the Advisory Boards of the American Comparative Literature Association, the Nineteenth-Century French Studies Association, the Interdisciplinary Nineteenth-Century Studies Association, and is on the International Advisory Board for Centre for Nineteenth-Century Studies at Durham University, U.K.  Alexandra Wettlaufer was President of the Interdisciplinary Nineteenth-Century Studies Association from 2011 to 2013 and is currently Treasurer and Board Member of the George Sand Assocation. With the support of the Guggenheim Fellowship, she plans to complete her manuscript entitled Reading George: Sand, Eliot, and the Novel in France and Britain, 1830–1900. Perhaps the most influential women writers of the  nineteenth century, George Sand and George Eliot were consistently compared to one another by critics and readers of their day, and from book reviews to obituaries the two were linked not only as popular female authors, but also as avatars of the ethics and aesthetics of their respective nations.  Yet despite these long-standing connections, surprisingly little critical attention has been focused in recent years on the textual relations between this pair of pseudonymous Georges. This study seeks to examine the transnational context within which their works were first produced and consumed in order to come to a better understanding not only of Sand’s and Eliot’s individual bodies of work, but also of the ways in which nineteenth-century artistic identity, reading, gender, and the novel were constructed in a dialectic conversation between France and Britain.