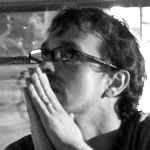 Born in Cuba and a long-time resident of Venezuela, choreographer Alexey Puig Taran began his career as a dancer, graduating from the National School of Ballet in Havana in 1988 and joining the Cuban National Ballet company two years later. During his eight years with that company, he also was an instructor and dancer with the Abierta Dance Company (1990-92) and an instructor in Classical Dance Technique (1991-98).  In Venezuela, he was a choreographer (1992-2000) and vice president (1992-98) for the New Dance Company, and the codirector of and instructor in the Experimental Workshop for the Performing Arts (1992-2000); he also held an appointment as Professor of Classical Dance Technique and Staging from 2001-2005 at Venezuela's University Institute of Dance.  Mr. Taran has been a Guest Choreographer at both the Zagreb Dance Company in Croatia and the Company Rajatabla in Venezuela, and an artist-in-residence at the International Summer Theater Festival in Hamburg, Germany, in 1996.

He is the cofounder of the six-member ensemble ERE Bistoury. His choreography includes 18 Minutos por 2½ Tiempó Bolo (1996), which was performed at "Movement 96" in Hamburg and the International Contemporary Dance Festival in Volgogrado, Russia, and won the Consul General's Prize at the Fifth International Choreography Convention of Seine-Saint-Denis in 1996. Carne en Doce Escenábolos (1998) also won the Consul General's Prize, in 1998; its performances include the Sixth annual International Contemporary Dance Converence and Performance Festival in Crakow, Poland, and the Performing Arts Center at the University of Texas. Proyecto ERE.Bistoury, begun in 1995, is a multipart, multidisciplinary work-in-progress, consisting of Bolo: Boceto (2005), which was performed at the Second Worldwide Festival of Dance Solos and Duets in Caracas as well as at the 13th Maracaibo Internationla Dance Festival; the second part, OBBÉ (2005), was performed at the 21st Festival of Young Venezuelan Choreographers in Caracas, among other venues; the third part, entitled Bolo, was completed during Mr. Taran's Guggenheim Fellowship term, and was performed at gorillaFEST07 and the Soho Festival in New York City.

Follow this link to view Shizo Bolo (a new, short version of Symbol), a new video from Bistoury Dance Company.