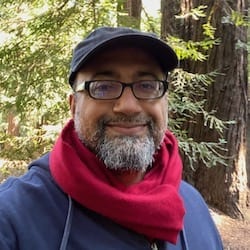 Born in Tehran, Iran, Ali Anooshahr is a Professor of History at the University of California, Davis. His research encompasses the cultural history of Mughal India as well as interactions and textual transmissions among Islamic Empires during the late medieval and early modern periods. He works with primary sources in Persian, Arabic, and Turkish. His approach is partially informed by the Buddhist concepts of the transience of identity and the interconnectedness of all life.

His publications include The Mughal Empire from Jahangir to Shah Jahan: Art, Architecture, Politics, Law and Literature, edited with Ebba Koch; Turkestan and the Rise of Eurasian Empires: A Study of Politics and Invented Traditions; and The Ghazi Sultans and the Frontiers of Islam: A Comparative Study of the Late Medieval and Early Modern Periods; as well several articles.

His research has been supported by the Mellon Foundation, Hellman Fellows Fund, UC Davis New Initiative/Collaborative Interdisciplinary Grant, and others. He has served as invited Professor at the École des Hautes Études en Sciences Sociales, Paris, and helped develop the Iran and Persian Studies Program at Davis.

He will use the fellowship to complete a micro-historical study of a sixteenth-century Eurasian slave and Indo-Persian author Jawhar Aftabachi.