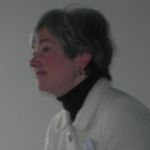 Alice C. Harris is a Professor of Linguistics at the University of Massachusetts Amherst. After receiving her Ph.D. from Harvard University in 1976 and completing a postdoctoral fellowship there, she served on the faculty of Vanderbilt University for many years. At Vanderbilt, she chaired the Department of Germanic and Slavic Languages, which housed the Linguistics Program, and was also a member of the Anthropology Department. In 2002 she joined the faculty at Stony Brook, where she served for some years as Graduate Program Director.

In 1974, Harris and a colleague were the first Americans permitted to undertake research in the Republic of Georgia when it was still part of the U.S.S.R. She has continued her work in this region,working principally on Georgian, Laz, Svan, Mingrelian, Udi, and Batsbi and focusing on unusual phenomena that challenge accepted linguistic theory. She has a strong interest in promoting the documentation of endangered languages and was instrumental in establishing the Documenting Endangered Languages (DEL) Program within the National Science Foundation. Harris’s recent and current research involves problems in defining the notion “word” and in the internal structure of words and paradigms.

Professor Harris has held major grants from the National Science Foundation, the NationalEndowment for the Humanities, and the International Research and Exchanges Board. Her books include Georgian Syntax: A Study in Relational Grammar (1981, reprinted in 2009), Diachronic Syntax: The Kartvelian Case (1985), Indigenous Languages of the Caucasus, I: Kartvelian (editor, 1991), Endoclitics and the Origins of Udi Morphosyntax (2002), and (with Lyle Campbell, 1995) Historical Syntax in Cross-Linguistic Perspective, the winner of the 1998 Linguistic Society of America Bloomfield Book Award. Also in 1998, she won the Earl Sutherland Research Prize at Vanderbilt University, a prize that usually is awarded in the natural sciences.

Harris and her husband, James V. Staros, have three children and two grandchildren.