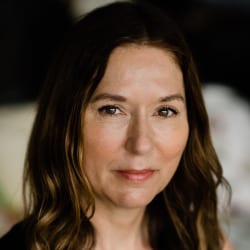 Alison Griffiths is a Professor of Film and Media whose research has brought the fields of early cinema, museum studies, visual anthropology, and medieval visual culture into productive dialogue. Hailing from a small village in Wales, Griffiths earned her BA from Leicester University, her MA from the University of London, and a PhD in Cinema Studies from New York University. Griffiths teaches at Baruch College, The City University of New York (CUNY) and the CUNY Graduate Center and has been a visiting professor at Stockholm University. Griffiths won the CUNY Felix Gross Outstanding Research Award in 1999 and has twice been a recipient of the Baruch College Presidential Award for Excellence in Scholarship. In 2015-16, she served as Interim Dean of the Weissman School of Arts and Sciences at Baruch.

Griffiths is the author of three monographs and over 35 journal articles and book chapters. Her first book, Wondrous Difference: Cinema, Anthropology, and Turn-of-the-Century Visual Culture (Columbia University Press, 2003), won the coveted Katherine Kovacs for Best Book in Film and Media in 2003 and Honorable Mention for the Krazna-Krausz Moving Image Book Award in 2004. The dissertation which inspired the book won the SCMS Best Dissertation Prize in 1999 and garnered grants from the Woodrow Wilson Foundation and NYU’s Graduate School of Arts and Science Dissertation Fellowship.

Griffiths’s second monograph, Shivers Down Your Spine: Cinema, Museums, and the Immersive View (Columbia University Press, 2008), cemented her reputation as an innovative visual studies scholar. Supported by grants from the NEH and Eugene Lang Foundation, Shivers situated the late 1990s/early 2000’s hype around immersive, interactive, and new digital media within a long historical arc. Also funded by a grant from the NEH, Griffiths’s most recent book, Carceral Fantasies: Cinema and Prison in Early Twentieth-Century America (Columbia University Press, 2016) tells the little-known story of how cinema found a home in the US penitentiary and how the prison and capital punishment emerged as settings and narrative tropes in modern cinema.

As a Guggenheim Fellow, Griffiths will be completing a book entitled Nomadic Cinema: A Cultural Geography of the Expedition Film that examines the genre during the interwar period, as well as its intellectual roots in earlier moments and practices of travel. As a recipient of a Huntington Library Fellowship, she will be in residence at the Huntington conducting research in winter 2019.