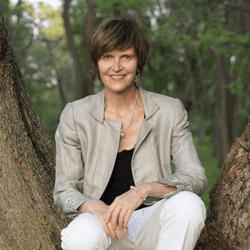 Alison began her career as a published poet, inspired by family tales and the oral traditions of British Columbia where she grew up. Discovering theatre in Ireland, she founded a performance company, writing and directing several music-theatre works which toured Canada and Europe. Encouraged towards cinema by her ensemble, the success of her commission to write a TVOpera, inspired Alison to make her award-winning mid-length first film, Second Sight. BBC Wonderland’s commissioned version, Ghostman of Skye, was “Pick of the Day” or “Critics Choice” in every major UK newspaper. Alison’s multiple award winning first feature, Cielo, premiered at the 55th New York Film Festival 2017, and was named as “One of the best documentaries of 2018” by Esquire and The Guardian.

Blending and blurring the boundaries between documentary and fiction, Alison’s films are immersive, sensorial and cinematic with a strong emphasis on character and landscape. Her work explores hybrid, innovative approaches to narrative and what a story can be; her intimate connection with her subjects reflects a sense of contagious wonder; her camera feels invisible; the musicality and associations of sounds and images always play a key role. More about Alison can be found on her website.