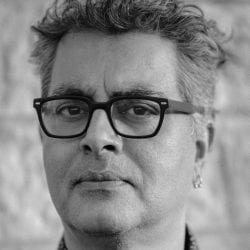 Amitava Kumar is the Helen D. Lockwood Professor of English at Vassar College. During his Guggenheim Fellowship term, Kumar will be working on a project on writing and academic style, Every Day I Write the Book.

Kumar’s previous books include Lunch With a Bigot listed among the “ten best books of 2015 published by academic presses;” A Matter of Rats, which the New York Times Magazine called “a cleareyed ode to an implausible place;” A Foreigner Carrying in the Crook of His Arm A Tiny Bomb, adjudged the best nonfiction book of the year by the Page Turner Awards, and described in the New York Times as a “perceptive and soulful — if at times academic — meditation on the global war on terror and its cultural and human repercussions;” Husband of a Fanatic, an “Editors’ Choice” book at the New York Times; Bombay-London-New York, a literary memoir which was on the list of “Books of the Year” in the New Statesman; and Passport Photos, winner of an “Outstanding Book of the Year” award from the Myers Program for the Study of Bigotry and Human Rights in North America.

Kumar’s essays and reviews have appeared in Harper’s, Bookforum, Kenyon Review, The Nation, NPR, The New York Times Book Review, The Guardian, Vanity Fair, Brick, Granta, and numerous other publications. He has been awarded writing residencies by Yaddo, Norman Mailer Writing Center, and the Lannan Foundation. In addition, he has been the recipient of fellowships from the NEH, Yale University, University of California-Riverside, Dartmouth College, and SUNY, Stony Brook. Kumar is a board member at the Asian American Writers Workshop and a contributing editor at Guernica and Caravan.