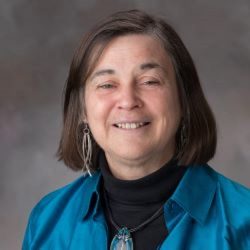 Amy Nelson Burnett is Paula and D.B. Varner University Professor of History at the University of Nebraska-Lincoln. She teaches early modern European history, and her research examines the role of print, preaching, and education in transmitting and transforming religious ideas. Her most recent book, Debating the Sacraments: Print and Authority in the Early Reformation (Oxford University Press, 2019) completes a study begun with Karlstadt and the Origins of the Eucharistic Controversy: A Study in the Circulation of Ideas (Oxford University Press, 2011). The two books offer a detailed analysis of how authors, editors, translators, and printers shaped public debate in the early Reformation. Burnett is also the author of Teaching the Reformation: Ministers and their Message in Basel (Oxford University Press, 2006), which won the Gerald Strauss Prize of the Sixteenth Century Society and Conference, and co-editor of A Companion to the Swiss Reformation (Brill, 2016). Her current project studies the development of a correspondence network linking the learned elite of south Germany and Switzerland in the first half of the sixteenth century. Her research has been supported by fellowships from the American Philosophical Society, the Alexander von Humboldt Foundation, and the Fulbright Scholar Program. Photo Credit: Greg Nathan