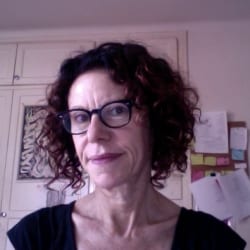 Amy Gerstler has published thirteen books of poetry. Scattered at Sea, a book of her poems published by Penguin in 2015, was longlisted for the National Book Award, shortlisted for the Kingsley Tufts Award, and was a finalist for the PEN USA Literary Award. Her book Dearest Creature (Penguin, 2009) was named a New York Times Notable Book, and was short listed for the Los Angeles Times Book Prize in Poetry. Her previous books include Ghost Girl, Medicine, Crown of Weeds, which won a California Book Award, Nerve Storm, and Bitter Angel, which won a National Book Critics Circle Award. In 2010 she was guest editor of the annual anthology Best American Poetry. Her work has appeared in a variety of magazines and anthologies, including The New Yorker, Paris Review, American Poetry Review, Poetry, several volumes of Best American Poetry and The Norton Anthology of Postmodern American Poetry.

Gerstler has also written fiction, nonfiction, and journalism, and has collaborated with visual artists. From about 1988-1998 she wrote monthly reviews for ArtForum magazine and has written exhibition catalog essays for the Whitney Museum, the Los Angeles Museum of Contemporary Art, and other museums and galleries. She has taught writing and/or visual art at California Institute of the Arts, Cal Tech, Art Center College of Design, the University of Utah, Pitzer College, The Bennington College Writing Seminars, and elsewhere. She currently teaches in the MFA Creative Writing Program at the University of California at Irvine.