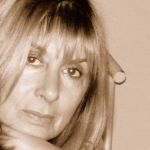 Renowned essayist and film critic Ana Amado was born in Santiago del Estero, Argentina. She studied political science at the Universidad Católica de Santiago del Estero, taking supplemental courses in 1969 at Harvard and other Boston-area universities with the support of the Fundación Harriet-Argentina, before finishing her undergraduate degree at her home institution in 1970. She was awarded her Ph.D. in Humanities from the University of Leiden in Holland in 2008.

In the intervening years she gained extensive media experience, working as a producer and commentator for a Santiago del Estero television station, and later at Channels 13 and 7 in Buenos Aires, where she contributed to such programs as Noticiero 7, Tercer Mundo, and the broadcasting program Ruidos en la cabeza; as a documentary film producer for Productora Creativos Audiovisuales in Caracas, Venezuela, in 1976; and, after her move to Mexico in 1976, increasingly as a film critic for such periodicals as Unomás Uno. She also coproduced the documentary Crónicas para armar la Historia. Montoneros: una Guerra de liberación with the Centro Universitario de Estudios Cinematográficos (CUEC) and the film department of the Universidad Autónoma de México (UNAM), where she first became deeply involved in women’s studies. Her interests in political science, film, and women’s studies took even deeper root on her return to Argentina in 1983.

Since 1988, Ana Amado has been an Associate Professor at the Universidad de Buenos Aires where she teaches film analysis and theory. She has also been a visiting professor at UNAM, the Universidade Nacionale in Rosario, Argentina, and Princeton and Duke universities.

During her Guggenheim Fellowship term, she will continue her examination of the relationship between political insurgency and the popular imagination as seen in the visual arts of Argentina.

She currently serves on the editorial staff of such academic journals as Pensamiento do los Confines and Mora and is editor of a series of books on cinema, published by Ed. Colihue.