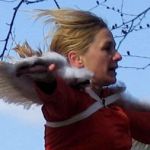 After graduating with degrees in dance, Rosane Chamecki and Andrea Lerner moved from Curitiba, Brazil, to New York City in 1989. Once in New York, they started their choreographic careers.

ChameckiLerner research started with a stubborn necessity to attain a bold physicality, one that could reveal the psychological state of a body. The goal was to strip the movement to its essential, having a physicality that carries its own drama.

Rife with struggle, the structures behaved as a magnifying glass where human behavior was amplified, raw and brutally honest. Moving further, they started deconstructing the human figure. Those deconstructions and displacements were a result of authentic inner impulses that revealed the physicality of the psyche, or better, the physiology of the psyche.

It’s been a long trajectory full of accumulation and shifts but with always one thing in common, the nakedness of the body as a map of oneself.

From 1992 to 2007, during their fifteen years choreographic collaboration, ChameckiLerner have created more than ten evening-length dances to much critical acclaim. In 1994, New York’s Dance Theater Workshop produced their first evening-length piece The Butterfly Effect.  It Inspired Andre Lepecki of the German magazine International Ballettanz Aktuell to opine, “It is certainly important to understand the choreographic reformulations proposed by Rosane Chamecki and Andrea Lerner. [The Butterfly Effect is] one of the most successful pieces I saw this year.”

Their choreographic collaborations have received  grants from numerous foundations, from the National Dance Project of the New England Foundation for the Arts, the Rockefeller Map Fund, the Jerome Foundation, The Greenwall Foundation, The Joyce Theater’s 2000 Altogether Different Fund for New Works, Mary Flaggler Charitable Trust, Altria, the Joyce Dutka Arts Foundation, Meet the Composer, Arts International, and the New York State Council for the Arts.   They have also received a sponsorship from Siemens, a prize from The Foundation for Contemporary Performance Arts and in 2001 the Bolsa Virtuose grant, awarded by the Brazilian Ministry of Culture to attend the New York Film Academy. In 2007, they premiered Exit at The Kitchen in New York, an “artistic suicide” that opens doors to their new challenge: working with film.

The two began collaborating as filmmakers in 2007 with their award winning first film, Flying Lesson. The film premiered at the 36th Dance on Camera Festival at Lincoln Center and won the Jury Award.  In 2008, it won the Best Experimental Film Award at the Brooklyn International Film Festival, was broadcast on Channel 13’s acclaimed Reel New York series, and is scheduled to air on SBS in Australia and Sky TV in the UK.  Flying Lesson continues to play the international film festival circuit and has been sold to art collectors through Roebling Hall Gallery in New York City.