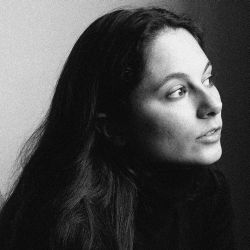 The prestigious literary magazine Jornal de Letras describes Andreia Pinto-Correia’s compositions as “a major contribution to the dissemination of Portugal’s culture and language, perhaps a contribution larger than could ever be imagined.” Her music — described by The New York Times as an “aural fabric” — is characterized by close attention to harmonic detail and timbral color. Following a family tradition of scholars and writers, her work often reflects the influence of literary sources from the Iberian Peninsula and beyond.

Ms. Pinto-Correia’s recent honors include commissions from the European Union Presidency, Fromm Music Foundation at Harvard University, Boston Symphony Orchestra Brass Quintet, American Composers Orchestra at Carnegie Hall, Tanglewood Music Center, Albany Symphony Orchestra, and Culturgest/National Bank of Portugal. Recently her works have been performed by the Minnesota Symphony Orchestra, Berkeley Symphony Orchestra, Calouste Gulbenkian Foundation Orchestra, Orquestra Metropolitana de Lisboa, and the Borromeo Quartet. She has also been the recipient of an American League of Orchestras/ New Music USA Music Alive Composer Residency, a Rockefeller Foundation Center Fellowship, the Alpert Award in the Arts/Ucross Residency Prize, and the Toru Takemitsu Composition Award by the Japan Society. In addition, she was the curator of the Fertile Crescent Festival for Contemporary Music at the Institute for Advanced Study in Princeton.

Upcoming premieres include an extended orchestral commission from the Boston Symphony’s Tanglewood Music Center in memory of Elliott Carter for the opening concert of the Contemporary Music Festival’s 75th anniversary; a work for American virtuoso Peggy Pearson for oboe and string trio (oboe quartet), and a piano trio for the extraordinary Horszowsky Trio. She will be a Civitella Foundation Fellow in 2015.

Born in Portugal, Ms. Pinto-Correia began her musical studies in her native Lisbon and received her Masters and Doctoral of Music degrees with Academic Honors from the New England Conservatory of Music as a student of Bob Brookmeyer and Michael Gandolfi. She attended the Minnesota Composer Institute, the European Network of Opera Academies (ENOA), the American Opera Projects (AOP), the Composers Conference, and the Tanglewood and Aspen Festivals.