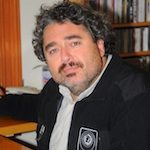 Andrés Rivera was born in Santiago, Chile, in 1966, and received the Geographer professional title from the University of Chile in 1989, when he was awarded the best student of his generation. He has been working in glaciology since 1988, when he did the first glacier inventory between 36-41° S latitude in Chile. Since then he has studied the main frontal, aerial, and volumetric changes of Chilean glaciers, particularly in Patagonia, the Lake District, and Central Chile. In 1997 he completed a Masters degree in Geography, conducting a number of research activities in the arid region of northern Chile. In 2004, Andrés received a Ph.D. in Glaciology from the University of Bristol, England, where he worked with Jonathan Bamber at the Bristol Glaciology Center. His thesis was related to the mass balance of the South Patagonian Icefield. Since the mid 1990s Andrés has been actively involved in various glaciological research projects in Antarctica, including studies in the Patriot Hills zone, field campaigns in the Antarctic Peninsula (Fleming glacier), surveys along oversnow traverses to the interior of the Antarctic Ice Sheet, including an expedition to South Pole in 2004, to Subglacial Lake Ellsworth in 2006, the Pole of Inaccessibility in 2007/2008, and more recently to the area of Union glacier and nearby glaciers. He actively participated in the airborne surveys organized by CECS, NASA, and the Chilean Navy in 2002, 2004, and 2008, when several glaciers in Patagonia, the Antarctic Peninsula, and the Amundsen Sea Embayment Area were mapped. Another zone where Andrés has shown permanent interest is the Patagonian Icefields, where he has conducted a number of fieldwork activities, including ground and airborne surveys. In the Chilean Lake District, he has been studying ice-volcano interactions of several active ice-capped volcanoes. In Central Chile, Andrés has been mapping ice thicknesses of several glaciers, and monitoring in detail some of the main valley glaciers of the region. Thanks to his experience and collaborative efforts, he designed together with his colleagues from CECS, the National Strategy for Chilean Glaciers, an ongoing route map prepared for the Water Cadastre of the Public Works Ministry of Chile. Andrés is particularly interested in remotely sensed satellite imagery analysis, laser altimetry, photogrammetry, GPS geodesy, radar systems, and glacier energy and mass balances methods. He has collaborated in many international research projects with Japanese, British, Swiss, German, and North American researchers. Andrés is member of the International Glaciology Society where he served in its council between 2008 and 2011, has collaborated in several scientific journals as editor and reviewer, and is Associated Professor at Universidad de Chile since 1991. During his Guggenheim Fellowship term, he will be studying ice dynamic responses to non-climate-related driving factors. He is married to Francisca Bown, has two children (Vicente and Emilia), and is living in Valdivia since 2004.