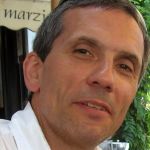 Originally from Boston, Andrew Frisardi has been living near Orvieto, Italy, since 1999, where he works as a writer, editor, and translator. His edition of Dante Alighieri’s prosimetrum the Vita Nova, with translation, introduction, and extensive annotations (including much Italian commentary translated into English for the first time), was published by Northwestern University Press in 2012. The Young Dante and the One Love, a book of his lectures on the Vita Nova, is being published by the Temenos Academy (London) in 2013. He has published two other books of poetry in translation: Giuseppe Ungaretti: Selected Poems (Farrar, Straus and Giroux), and Air and Memory, poems and an interview from the Milanese dialect poet Franco Loi (Counterpath Press). The Ungaretti volume won the 2004 Raiziss/de Palchi Translation Award from the Academy of American Poets, and a Hawthornden Literary Fellowship was awarded for the Loi project. His translations have been widely anthologized, including in The Faber Book of 20th-Century Italian Poetry, edited by Jamie McKendrick; and in The FSG Book of Twentieth-Century Italian Poetry, edited by Geoffrey Brock; and his poems, articles, reviews, and translations have appeared in numerous print and online journals.

During his Guggenheim Fellowship period, he will be translating, annotating, and writing an introduction to Dante’s unfinished allegorical-philosophical treatise the Convivio (ca. 1304–07).