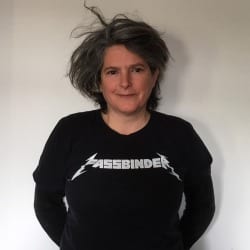 Angela Dufresne is a painter, teacher and occasional writer who has shown her work in the U.S. and Europe since 1993. She has been the subject of twenty-three solo exhibitions and participated in over 100 group shows. Notable solo exhibitions were held at the Hammer Museum in Los Angeles, CA and Macalester College in Minneapolis, MI. Selected venues for group exhibitions include Greater New York 2005 at P.S.1 Contemporary Art Center in NY, The National Academy of Arts and Letters in NY, the RISD Museum in Providence, RI, the Kemper Museum in Kansas City, Brooklyn Academy of Music in NY, The University of Richmond Museum in Richman, VA, The Aldridge Museum in CT, Sarah Lawrence College in Yonkers, NY, the Rose Museum in Waltham, MA, Mills College in Oakland, CA, Minneapolis School of Art and Design, among others.

Born in Hartford, CT in 1969, Dufresne spent her formative years in Olathe, Kansas. She studied painting at the Kansas City Art Institute in 1991. After moving around prolifically through the 1990’s from Kansas City to Minneapolis to San Francisco to Portland ME, Dufresne earned her MFA in Painting at Tyler School of Art in Philadelphia in 1998. Dufresne has been a resident artist at the Siena Art Institute, the Fine Arts Work Center and Yaddo. She has won grants from the National Academy of Arts and Letters in NY, and the Jerome Foundation in Minneapolis. She is an Assistant Professor in the Painting Department at the Rhode Island School of Design.

For the past 5 years, Dufresne’s writing has appeared in Art 21 and Hyperallergic. In addition to an active painting and teaching life, Dufresne has organized exhibitions throughout the US. Her role as artist-curator began in the 90’s in Portland, ME where she helped run The Dead Space Gallery, artist Run and funded that helped to define a connection between the city and its’ artists community. Her curated shows have popped up in New Mexico, Los Angeles, New York, and the Rhode Island School of Design, as well as video screenings in New York and Los Angeles.

Dufresne’s paintings exuberantly weave imagery, narrative, paint, and visceral pleasure. She refers to the work as examples of non-paranoid, porous ways of being in the world. Delivered with absurdity, affection and feminist vibrato, Dufresne presents figurative articulations that feverously emerge out of the paint. Humorous, giddy, vulnerable, non-heroic, perverse, her figures revel in their destabilized relationship to their environments. Her subjects are nether man nor nature, form or formless, but allow for both to coexist in their lack of selfhood and their openness to absorb, fuse with, metabolize the world around them. In cinematic dissolves they conjure up the centrality, the ontology of humanity, as challenged. Deft in techniques of revision, erasure, overlay and addition, Dufresne deploys empathy and humor with equal parts skill and sensitivity in a commitment to painting’s ability to present, transgress and reconfigure experience and representation.