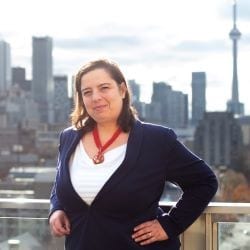 Anna Shternshis is the Al and Malka Green Professor of Yiddish studies and director of the Anne Tanenbaum Centre for Jewish Studies at the University of Toronto. She received her doctoral degree (DPhil) from Oxford University in 2001. Shternshis is the author of Soviet and Kosher: Jewish Popular Culture in the Soviet Union, 1923 - 1939 (Indiana UP, 2006) and When Sonia Met Boris: An Oral History of Jewish Life under Stalin (Oxford UP, 2017). She is the co-editor-in-chief of the journal East European Jewish Affairs. Together with artist Psoy Korolenko, Shternshis created and directed the Grammy-nominated Yiddish Glory project, an initiative that brought back to life forgotten Yiddish music written during the Holocaust in the Soviet Union. She is now working on a book, tentatively entitled Last Yiddish Heroes: A Lost and Found Archive of the Holocaust in the Soviet Union about Yiddish music created in Nazi-occupied Ukraine. It also tells the story of the scholars who recorded and collected these unique materials during World War II, and the terrible price they paid for their heroic work.  Shortly after the war, the researchers were arrested during Stalin's anti-Jewish purge, their work confiscated, and they died thinking these songs were lost to history. Photo Credit: Jaclyn Shapiro