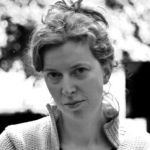 Anna Shteynshleyger was born in Russia in 1977. She came to the United States in 1992. She received a B.F.A. from the Maryland Institute College of Art (1999) and an M.F.A. from Yale University School of Art (2001). In 2004 a solo exhibition of her work was held at the Museum of Contemporary Art in Chicago and in 2005 she had her solo debut in New York City at Moti Hasson Gallery. Her photographs are in the permanent collections of the Jewish Museum, New York City; The Museum of Contemporary Photography and the LaSalle Bank Photography Collection, both in Chicago; and the Schwartz Contemporary Art Collection at the Harvard Business School in Boston; among others. Her work has been included in numerous group exhibitions nationwide. Anna Shteynshleyger is currently on the faculty at the School of the Art Institute of Chicago and Columbia College Chicago.

She is scheduled to have a one-person presentation of her new work at the Renaissance Society of the University of Chicago in January 2010.