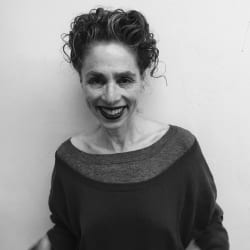 Annabeth Rosen's work hovers between the found and the manufactured and seems to be in constant flux in an uneasy visual stability.

"Made of glazed and fired clay, Rosen’s primary medium, and not more than a few feet high......the sculptures seem to have neither fixed contours nor stable shape; even their scale appears to shift as you look......not so much covered with as compounded of hundreds of writhing, snakelike elements, they are variously volcanic, beastly, catastrophic and unnervingly funny, suggesting things going terribly wrong, but not yet irreversibly..." Nancy Princenthal

Rosen's work has been in many solo shows in museums, commercial galleries and non-profit spaces. Most recently, a twenty-year survey of her work mounted at the Contemporary Arts Museum Houston will travel to Cranbrook Academy of Art, her alma mater and the Contemporary Jewish Museum in San Francisco. Rosen’s work has been widely exhibited in the U.S. and is in the collection of the LA County Museum, The Oakland Museum, The Denver Art Museum, The Philadelphia Museum of Art and many public and private collections. P.P.O.W Gallery in New York, and the Anglim Gilbert Gallery in San Francisco represent Rosen's work. Rosen has received multiple grants and awards, a Pew Fellowship, two National Endowment for the Arts Fellowships, a UC Davis Chancellors Fellowship, a Joan Mitchell Painters and Sculptors Award, and in 2016, was named a USA Artist Fellow.

She received her BFA from The NYS College of Ceramics at Alfred University in 1978, and her MFA from Cranbrook Academy of Art, Bloomfield Hills, Michigan, in 1981. Since 1997 Rosen has held the Robert Arneson Endowed Chair at the University of California Davis. She lectures around the country on her work, and the present state of ceramics as it contributes to the sensory information that enriches our daily working life.