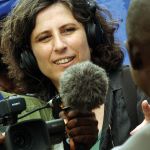 As a filmmaker, Anne Aghion has been drawn to places as far-ranging as rural Rwanda, the ice fields of Antarctica, and the slums of Managua. She has been praised by critics both as a director of unique and poetic vision, and a documentarian who conveys a strong sense of the people and places she covers. Her work has also earned her, in addition to her Guggenheim Fellowship, a UNESCO Fellini Prize,  an Emmy, and the Human Rights Watch International Film Festival’s Nestor Almendros Award for courage in filmmaking, among other honors.

Her new feature documentary My Neighbor My Killer caps nearly ten years of filming in post-genocide Rwanda, where a daring experiment in reconciliation and justice—the Gacaca Law (pronounced ga-CHA-cha)—has been put in place. There, over time, Aghion charted the emotional impact of a system of local open-air courts that adjudicates genocide crimes, and returns killers to their homes in exchange for confessions. She had examined the Gacaca Law system previously in a trilogy of short films: Gacaca, Living Together Again in Rwanda; In Rwanda We Say . . . The Family That Does Not Speak Dies; and The Notebooks of Memory.

For most of her life, Aghion has been a dual resident of New York and Paris. She spent the first eight years of her career in both editorial and administrative capacities at The New York Times Paris bureau, and at the International Herald Tribune. Moving into film, she worked in a variety of capacities including videographer, production, and postproduction manager with filmmakers such as Richard Leacock and Valérie Lalonde, and Judith Abitbol, and for documentaries aired on major cable networks such as Canal+ and ARTE.

Aghion has also been the recipient of grants from the Soros Documentary Fund, the Sundance Documentary Fund, the United States Institute of Peace, the New York State Council on the Arts, the Compton Foundation and the Peter S. Reed Foundation. She was able to generate funding for the Gacaca trilogy from the Austrian Development Agency, the Belgian Ministry of Foreign Affairs, the Swiss Development Cooperation, and Oxfam Novib, thanks to the significant impact of the Gacaca system.

Follow this link for more information about the documentary Ice People.

Follow this link for more information about Ms. Aghion’s award-winning films on Rwanda.