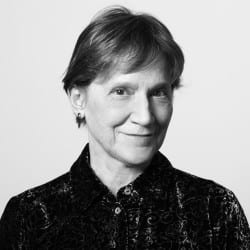 Anne Cattaneo is the dramaturg of Lincoln Center Theater, Co-Executive Editor of the Lincoln Center Theater Review and the creator and head of the Tony Award Honor-nominated Lincoln Center Theater Directors' Lab. A three-term past president of Literary Mangers and Dramaturgs of the Americas, she was the recipient of LMDA's first Lessing Award for lifetime achievement in dramaturgy. Her translations of 20th Century German playwrights include Bertolt Brecht's The Life of Galileo (Goodman Theatre), Botho Strauss' Big and Little (Phoenix Theater), and Ernst Jandl's From the Frontier (Guthrie Theater).  She has taught Theater History in the Drama Division at Juilliard for many years and in 2017, received Juilliard's Excellence in Teaching Award. In July 2011, she was awarded the Margo Jones Medal given annually to a “citizen of the theater who has demonstrated a significant impact, understanding and affirmation of the craft of playwriting, with a lifetime commitment to the encouragement of the living theatre everywhere.” Her book on the practice of dramaturgy, “The Art of Dramaturgy” is forthcoming from Yale University Press. Photo Credit: Brigitte Lacombe