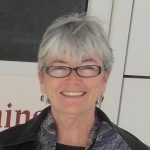 Anne D. Hedeman is Professor of Art History and Medieval Studies at the University of Illinois and a Fellow of the Medieval Academy of America. She has been at Illinois since 1983, after earning an A.B. with honors in Art History at Princeton University and an M.A. and Ph.D. in Art History at The Johns Hopkins University. She is an expert on medieval manuscripts and the history of the book, an interest that began when she was an undergraduate and first visited Special Collections in Firestone Library at Princeton.

What drew her to manuscript studies was the intense collaboration that produced manuscripts; they were an interdisciplinary product avant la lettre. She have always been interested in issues of reception, and counts herself among scholars who analyze the complicated ways in which the book, a physical object encoded by scribes, illuminators, rubricators, and commentators, mediates between readers, with their external and diverse appropriation of the text, and the text itself, which allegedly contains the ideal reading inscribed by an author.

In seeking to uncover the role of visual imagery in this interdisciplinary bundle, she concentrated on secular historical texts, and explored various facets of the problem in publications. The Royal Image, Illustrations of the Grandes chroniques de France, 1274-1422, analyzed the construction and reception of visual cycles of French royalist history over the longue durée from the initial translation of the Grandes chroniques in the 1270s by the monks of Saint-Denis to the early fifteenth century when civil war split France. Of Counselors and Kings: The Three Versions of Pierre Salmon’s “Dialogues” considered the construction, emendation, and reception of a highly unusual illuminated Mirror of Princes (a guide to good government) written in 1409, revised and reissued around 1413, and copied in 1500. She was able to complete a full study of the text, demonstrate the essential role that illustrations played in constructing its meaning, and reveal Salmon, who was a royal notary and secretary, to be an independent and moderate political voice attempting to capture the attention of the often-mad king Charles VI and those who ruled in his place.

The problems posed by Salmon’s complex and compelling manuscripts lead her to an extended project on the relationship of French notaries and secretaries to the arts. She found such a rich cache of material that she decided to start by defining “visual translation” as it was employed by Laurent de Premierfait, a notary and secretary and one of the most noted Latin poets and prolific translators at the French court in the first two decades of the fifteenth century. Her book, Translating the Past: Laurent de Premierfait and Boccaccio’s “De casibus”, examines Laurent’s efforts as a humanist newly returned from Italy and out of touch with Parisian taste to translate Boccaccio effectively for a noble audience accustomed to lush visual imagery. It also traces the adaptation of Laurent’s successful formulation by a broader Parisian constituency of booksellers and patrons. His successful cultural transformation of Boccaccio underlines the key role played by visual imagery in translating the past or distant contemporary cultures and making them familiar to fifteenth-century French readers.

She plans to continue this project during the period of her 2011-2012 Guggenheim Fellowship, writing a book, Visual Translation and the First French Humanists, that will analyze the role of images in both the personal manuscript collections amassed by three early fifteenth-century humanists and the more public literary commissions they received.