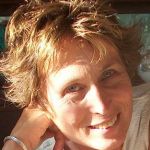 Anne Makepeace has been making award-winning films centering on cross-cultural themes for twenty-five years.  Her most recent film, Rain in a Dry Land, was the lead show on PBS’s premiere documentary series P.O.V. in 2007, was nominated for an Emmy Award in 2008, and screened at more than twenty-five film festivals around the world, winning six Best Documentary awards.  Among Anne Makepeace’s other  credits as writer/producer/director are Baby, It’s You, which screened at the Whitney Biennial 2000 and many festivals including Sundance and IDFA, and was the lead show on P.O.V‘s 1998 season: Coming to Light (2000), her film about Native perspectives on E. S. Curtis, which was short-listed for a feature documentary Oscar and won Best Documentary awards from the American Anthropological Society, the American Historical Society, and Telluride MountainFilm, and was broadcast on American Masters 2001, ARTE 2002, and many foreign stations; and Robert Capa in Love and War (2003),  recipient of a National Prime Time Emmy Award, Voice for Humanity Award at Telluride MountainFilm, Sundance Documentary Competition, and was broadcast on American Masters, the BBC and more than twenty-five stations around the world.  She has been awarded funding by the Sundance Documentary Fund, the Corporation for Public Broadcasting, ITVS, the National Endowment for the Arts, the National Endowment for the Humanities, American Masters, HBO, PBS, A&E, and the American Film Institute.

During her Guggenheim Fellowship term, she is working on a documentary about the return of the Wampanoag language, the first time a language with no Native speakers has been revived in this country.  This project is also receiving support from the Radcliffe Institute, as well as grants from the Sundance Documentary Fund, the LEP Foundation, the Massachusetts Foundation for the Humanities, and ITVS, the independent arm of the Corporation for Public Broadcasting.  She is also completing writing and directing Building China Modern, a documentary produced by Pacem Productions about I. M. Pei and his new museum in Suzhou, China.

Listen to an interview with Melanie Roderick, President of the Wôpanâak Language Reclamation Project, on We Still Live Here: Âs Nutayuneân. Anne Makepeace’s documentary chronicles the history and revival of Wôpanâak, the language of the native southeastern Massachusetts Wampanoag community, and the pioneering work of Jessie Little Doe Baird to restore this essential piece of Wampanoag heritage.