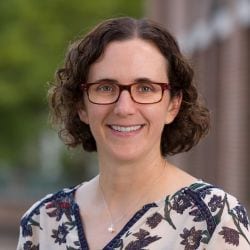 Anne McNeil is the Arthur F. Thurnau Professor of Chemistry and Macromolecular & Science Engineering and an HHMI Professor at the University of Michigan, Ann Arbor, where she leads a research group that uses chemical approaches to address societal problems in materials science. In addition, she has led several curriculum-based efforts aimed at inspiring more students to pursue STEM careers by introducing them to more authentic research environments at an early stage. Prof. McNeil earned a BS degree in Chemistry from the College of William and Mary in 1999 and a PhD from Cornell University in 2005, working with Prof. David Collum. She performed post-doctoral work in the lab of Prof. Timothy Swager at the Massachusetts Institute of Technology as a L′Oreal Post-doc Fellow, prior to joining the faculty at Michigan in 2007.

Prof. McNeil has been recognized with a Presidential Early Career Award in Science and Engineering, the Arnold and Mabel Beckman Young Investigator Award, the Office of Naval Research Young Investigator Award, an NSF CAREER Award, an Alfred P. Sloan Research Fellow, a Camille and Henry Dreyfus Foundation Teacher-Scholar Award, an HHMI Professor Award, and recently she was elected into the American Academy of Arts and Sciences as a Fellow. Prof. McNeil has also earned accolades for her teaching, including a University of Michigan College of Literature, Science, and Arts Excellence in Education Award, the Class of 1923 Memorial Teaching Award, and the Provost’s Teaching Innovation Prize.

Prof. McNeil is deeply committed to supporting, promoting, and elevating the careers of people from historically underrepresented groups in the field of Chemistry, with numerous initiatives including founding the website Diversify Chemistry, tweeting about diversity and diverse scientists through @DiversifyChem and #365DiversifyChem, and giving public lectures on the challenges of diversifying science and why it’s important.