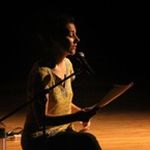 Annie-B Parson founded Big Dance Theater with Paul Lazar in 1991. She has created fourteen pieces for the company, touring the work both nationally and internationally to such venues as Walker Art Center, Museum of Contemporary Art, Chicago, the Spoleto Festival USA, On the Boards, Jacob’s Pillow Dance Festival, and UCLA, Live!, as well as international festivals and venues in the Netherlands, France, Italy, and Germany. In New York City, her work has been presented at Dance Theater Workshop, The Kitchen, Classic Stage Company, and the Guggenheim Works & Process Series. She was honored with a BESSIE in 2002 for her body of work with the company. She recieved NYFA Fellowships in 2000 and 2005. Ms. Parson was a member of Sincha Hong’s company, Laughing Stone, from 1984 to 1994, performing at LaMama and The Joyce Theater in New York City and on tour throughout Asia and Europe. In 2001 she collaborated with six other choreographers, including Robert LaFosse, Chet Walker, and Richard Move, for The Seven Deadly Sins Project at Jacob's Pillow. In 2005 she curated Sourcing Stravinsky for Dance Theater Workshop. She was awarded company residencies at The Yard on Martha’s Vineyard in 1996, 1998, and 2002, was a mentor for the Joyce Theater choreographers' development series in October 1999. She has taught in the Master's directing program at Juilliard and for the Bessie Schoenberg Master Class in Choreography. She was a YCC choreographer at The American Dance Festival in 1995 where she worked with composer Richard Einhorn to create City of Brides, which was presented at City Center’s Fall for Dance Festival in 2004. Since 1993 she has been an instructor of choreography at NYU’s Experimental Theater Wing. Her choreography for TV and film includes Jonathan Demme’s Philadelphia.