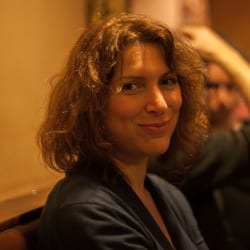 Annie Dorsen is a director and writer whose works explore the intersection of algorithms and live performance. Her most recent project, The Great Outdoors, premiered at Noorderzon Festival (Groningen) and has also been presented at Kampnagel Sommerfestival (Hamburg), Crossing the Line (NYC), and Théâtre de la Cité (Paris.) Her previous algorithmic work, Yesterday Tomorrow (2015), premiered at the Holland Festival, and has been presented since at Berliner Festspiele as part of Maerzmusik, Ultima Festival (Oslo), PS122's COIL Festival (NYC), and Festival d'Automne (Paris), amongst others. Earlier algorithmic theatre projects, A Piece of Work (2013) and Hello Hi There (2010), have both toured extensively in the US and Europe. In 2017 the script of A Piece of Work was published by Ugly Duckling Presse, and she has contributed essays for Theatre Magazine, Etcetera, Frakcija, and The Drama Review (TDR). She is the co-creator of the 2008 Broadway musical Passing Strange, which she also directed. In addition to numerous awards for Passing Strange, Dorsen received a 2016 Foundation for Contemporary Arts Grant to Artists Award, the 2014 Herb Alpert Award for the Arts in Theater, and a 2008 OBIE Award. She is currently a Visiting Professor in Theater and Performance Studies at the University of Chicago.