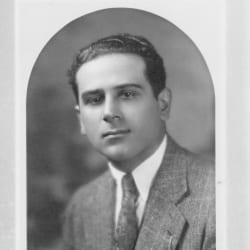 As published in the Foundation’s Report for 1928:
(Profile photograph by Theatrical Studio)