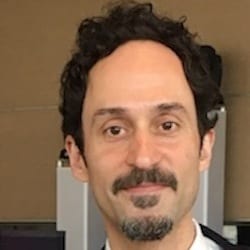 Anthony Cerulli (Ph.D., University of Chicago) is an historian of religions. His work addresses central issues in the study of religion, such as the nature of ritual, comparitivism, and the politics of religious rhetoric. His work also contributes to the fields of narrative medicine and medical humanities, where, in the American literary context, he has written about the relationship between religion and medicine in the work of Nathaniel Hawthorne. Most of his work is in the field of South Asian Studies, however, where his research combines ethnographic and philological methods to probe associations between Indian religions and healing systems. With a keen interest in how and why people "do things with texts" to heal and sustain human wellbeing, his research explores intersections of premodern (Sanskrit and Manipravalam) and modern (Malayalam, Hindi and English) literary cultures at sites of ritual healing, among Hindu communities, and in institutions of medical education. Cerulli is the author of Somatic Lessons: Narrating Patienthood and Illness in Indian Medical Literature (State University of New York Press, 2012), co-editor of Medical Texts and Manuscripts in Indian Cultural History (Manohar, 2013), and author of a number of articles and essays.

Anthony Cerulli's next project, Sanskrit Medical Classics in Crisis: Language Politics and the Reinvention of a Medical Tradition in India, which he will pursue as a Guggenheim Fellow, explores the impact of European colonial medicine on the transmission of knowledge in one of India's classical medical traditions, Ayurveda. This book-length study will produce a history of ayurvedic education during the late-colonial and postcolonial eras in two institutions of learning: the ayurvedic college and gurukula. The project draws on Cerulli's fieldwork among traditionally trained physicians in south India over the last decade, and it problematizes the topic of Sanskrit training in contemporary ayurvedic education.

Cerulli's research has been supported by fellowships from the American Council of Learned Societies, European Institutes for Advanced Study, Fulbright Foundation, and National Endowment for the Humanities. He has held appointments as Directeur d'études invité at the École des hautes études en sciences sociales in Paris, Chercheur invité at the Institut d'études avancées de Paris, and twice as Scholar-in-residence at the Rochester Zen Center in western New York. Since 2009, he has been the Managing Editor of the journal, India Review. He is currently Associate Professor of Asian Languages and Cultures at the University of Wisconsin–Madison.