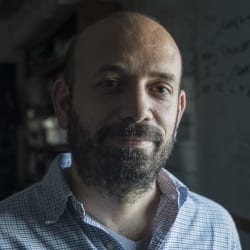 Antonio Méndez Esparza is a director and screenwriter, whose latest film Aquí y Allá premiered at Critics Week at the Cannes Film Festival in 2012, where it was awarded the Grand Prix. The film traveled to more than 60 film festivals around the world, including the New York Festival, Karlovy Vary, Moscow, Thessaloniki, San Sebastian, Tokyo, AFI Film Festival, Busan and Mumbai gathering great reviews and awards.

The film premiered theatrically in the US, Canada, France, Netherlands, Italy and Spain. And it was broadcasted in Arte (France) and HBO Latino (Latinamerica).

It was praised as a “Quietly devastating exploration” Variety, “almost a masterpiece” (Indiewire), “Brilliant” (El mundo), among others.

Antonio is the co-founder of Aquí y Allí Films, a feature film production company with a special interest in fostering the work of relevant and personal storytelling.

Born in Madrid, Antonio earned a law degree before moving to the U.S. to develop his filmmaking career, where he earned an MFA from Columbia University. Antonio teaches directing classes at the graduate and undergraduate levels in Florida State University.

Cesare Zavattini, father of neorealism and perhaps its most important writer – wrote The Bicycle Thief and Romma Open City expressed the following in 1952 in Some Ideas on the Cinema:

The most important characteristic and the most important innovation, of what is called neorealism, it seems to me, is to have realized that the necessity of the ‘story’ was only an unconscious way of dis¬guising a human defeat, and that the kind of imagination it involved was simply a technique of superimposing dead formulas over living social facts. Now it has been perceived that reality is hugely rich, that to be able to look directly at it is enough; and that the artist’s task is not to make people moved or indignant at metaphorical situations, but to make them reflect (and, if you like, to be moved and indignant too) on what they and others are doing, on the real things, exactly as they are.

The grant will provide integral support for the making of Life and Nothing more, his sophomore film. Set in Florida, as was also the case with Aquí y Allá, The obstinate issues of family, race, and the legal system will be rooted in the story of our protagonists. We hope to follow the neorealist tradition.

The film will be open to the guidance the guidance from the non-professional actors, to the discoveries that surface while filming. From thematic elements to possible narrative detours. This process will allow to track an unfolding reality, and to embrace the present.

It is in the act of production, the filming process, where films like this are shot, edited and, often, re-written. It is, simply, where they are discovered. Instead of a compartmentalized approach where the shooting, editing and even scriptwriting occurs at separate stages, a film of this nature needs a constant conversation between these disciplines. Each must move together as one, perhaps as it always should be, with the purpose of finding the story during its creation.