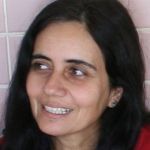 Aparecida Vilaça  is currently Associate Professor in the Postgraduate Program in Social Anthropology, Museu Nacional/Universidade Federal do Rio de Janeiro, and a researcher for the National Science Research Council (CNPq). Since 1986 she has worked among the Wari' Indians of Southwestern Amazonia, Brazil.  Fieldwork has been financed by the Ford Foundation, the Wenner-Gren Foundation for Anthropological Research (predoctoral grant and international collaborative grant), and Finep.  She was Professor Invité at the Ecole des Hautes Etudes en Sciences Sociales in Paris in 1999, Directeur d'Etudes Invité at the Ecole Pratique des Hautes Etudes in the same city in 2000, Visiting Professor of the Centre of Latin American Studies of the University of Cambridge in 2001, and Visiting Scholar in the Department of Social Anthropology at the same university in 2004.

Ms. Vilaça has a master's degree and Ph.D. in social anthropology; in 1991 her master's thesis was honored as the best in Brazil in the field of social sciences by the National Association of Postgraduate Studies and Research in Social Sciences (ANPOCS).  She is the author of Comendo como gente. Formas do canibalismo wari' (Pakaa Nova) (Ed. UFRJ and ANPOCS, 1992); Quen somos nós. Os Wari' encontram os brancos (Ed. UFRJ, 2006); and a forthcoming book on the first encounters between the Wari' and the whites, to be published by Duke University Press. She coauthored Nós e os Indios (Rio de Janiero: Ed. Moderna, 2000) and Native Christians: Modes and Effects of Christianity in the Americas (Ashgate, forthcoming).

Since 2002 she has been studying the phenomenon of indigenous conversion to Christianity in Lowland South America, taking as a starting point the Wari' experience with the New Tribes protestant fundamentalist missionaries.  Her approach is based within a broader apprehension of indigenous social and cosmological forms, on the premise that conversion cannot be analyzed independently of other contexts of transformation and actualization of these forms.  She analyzes the phenomenon of conversion in continuity with classic themes such as shamanism, hunting, and warfare.  Her Guggenheim Fellowship helped to support this work.

Follow this link for more information about the publication of Aparecida Vilaça's new book Native Christians: Modes and Effects of Christianity Among Indigenous Peoples of the Americas.