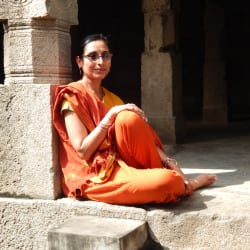 Archana Venkatesan is Associate Professor of Comparative Literature and Religious Studies at the University of California, Davis. She received her A.A. from De Anza Community College (Cupertiono, CA), and her B.A, M.A. and Ph.D. from the University of California, Berkeley. Her research interests are in the intersection of text and performance in South India, as well as in the translation of early and medieval Tamil ecstatic poetry into English. She is the author of The Secret Garland: Āṇṭāḷ’s Tiruppāvai and Nācciyār Tirumoḻi (Oxford University Press, 2010 and Harper Collins, 2015), A Hundred Measures of Time (Penguin Classics, 2014), and with Crispin Branfoot, Andal’s Garden: Art, Ornament and Devotion in Srivilliputtur (Marg 2016). Her Guggenheim project supports her long-term study of the Annual Festival of Recitation, which commemorates the many ways in which poetry—its memorization, recitation, staging and its translation into visual form—creates not just worlds, but gods as well. She is collaborating with Francis X. Clooney on a translation of Nammāḻvār’s Tiruvāymoḻi, and is also one of the translators of Kampaṉ’s Rāmāyaṇa for the Murty Classical Library of India (Harvard University Press). In 2008, Archana founded the Religions of India Initiative at UC Davis, which advocates for the academic study of India’s diverse religious traditions. In recognition of her research, she was selected as a UC Davis Chancellor’s Fellow in 2014, a title she will hold until 2019. Archana has received fellowships from the National Endowment for the Arts, National Endowment for the Humanities, The American Institute of Indian Studies, The American Academy of Religion and Fulbright.