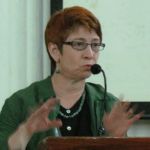 Arienne Dwyer’s work bridges linguistic typology and ethnography, critical discourse analysis, indigenous advocacy, and digital humanities. She is known for identifying Chinese Inner Asia as a language convergence area (Sprachbund), and for her work in Uyghur language and cultural studies.

She views Inner Asia as having a common grammar of linguistic and cultural practices, where social and linguistic convergence do not necessarily correspond to political economic dominance. Years of collaborative in situ work produced a wealth of audiovisual and transcription materials of oral arts and everyday life. To make these available for future generations of Inner Asians as well as to academia in readily queryable and enduring formats, Arienne and her research group have created the web resource Interactive Inner Asia. It allows comparisons across five unwritten Turko-Mongolic languages (Salar, Monguor, Baonan, Wutun, and Kangjia), as well as Tibetan and Chinese, and forms the basis for the book she will be working on during her Guggenheim Fellowship term.. The melding of qualitative with quantitative approaches to data analysis has also served as a powerful impetus in her research, as evident in her grammar of one of these languages (Salar: a study in Inner Asian areal contact processes).

Being a leading advocate and ally of First Nations research, she has collaborated with, trained, and been trained by First Nations scholars and language activists worldwide, and also has contributed a critical perspective to the ethics of collaborative research (Competing Ideologies of Collaboration, Models of Successful Cooperation, Ethics and practicalities of cooperative fieldwork and analysis). She directed the CoLang Institute for Language Research. As a member of the UNESCO ad hoc Expert Committee on Endangered Languages, she co-authored the guidelines (Language Vitality and Endangerment) for national governments and NGOs around the world to assess language vitality.

She is a key figure in Central Asian language studies in the U.S, building a major longitudinal corpus of annotated manuscripts and transcripts in a publicly accessible website, Uyghur Light Verbs (in addition to investigating the light verbs that add nuance to main verbs, to understand their universal properties cross-linguistically). She also launched a Uyghur language program and co-authored the open access textbook  Greetings from the Teklimakan: a handbook of Modern Uyghur. Her critical-discourse monograph (The Xinjiang Conflict: Uyghur Identity, Language Policy, & Political Discourse) showed how the Western public was willingly manipulated by Chinese tropes of “terrorism” post-9/11. Arienne does frequent media interviews on Uyghurs, on language ideology and language politics in China, and on language endangerment.

Aside from these public appearances, she is on the editorial board of two journals and was awarded her university’s highest research achievement award (the Balfour Jeffreys Career Research Award in social science research) in 2009. In 2014, she is working a book manuscript (Camel Spring: Narratives and Metanarratives of the Silk Road).

Her Guggenheim project focuses on the history of Inner Asia as a linguistic and cultural convergence zone. She will apply text-mining techniques to the languages of Inner Asia, in order to assess similarity and difference in linguistic, literary, and historical aspects. The book argues for an areal grammar, in which the dominant languages, Tibetan and Chinese, influenced nondominant languages (e.g., in Tonogenesis in Southeastern Monguor she previously discovered Chinese caused a Mongolic language to develop tonal contrasts), but these latter languages have also had a surprisingly strong impact on Chinese and Tibetan.