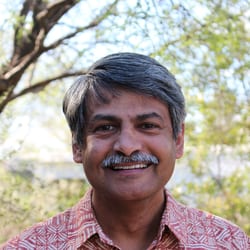 Arjun Dey loves the thrill of astronomical discovery. He has been exploring the universe since he was 15 years old, when he started as an amateur astronomer and telescope builder. His research focuses on how galaxies form and evolve, and what they can tell us about the mysterious, invisible contents of the universe: dark matter and dark energy. In his past work, he broke a redshift barrier, discovering the first galaxy beyond a redshift of 5. He also discovered one of the largest gaseous galaxy-forming nebulae, a population of dust-enshrouded galaxies, forming galaxy clusters, and old galaxies in the distant universe. He has been a driving force behind large sky surveys and creating new instruments for cosmic cartography. His research is further described on his website.

As a staff astronomer at NSF’s National Optical-Infrared Astronomy Research Laboratory (NOIRLab), Arjun has spearheaded several research initiatives, observational and instrumentation programs. He is a key member of the Dark Energy Spectroscopic Instrument survey project, which aims to measure the expansion history of the universe, explore the nature of dark energy, investigate the evolution of galaxies and the cosmic web they trace, and study the structure and fossil history of the Milky Way.