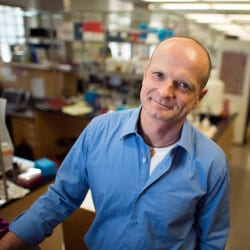 Research in my laboratory at Indiana University focuses on the evolution of developmental processes (a field also known as evo devo). I seek to understand how organisms build themselves and their parts during their life time, how these abilities originated and diversified over generations, and most importantly, how they had to be modified to yield something truly novel in evolution: what did it take to evolve that first wing from a flightless ancestor? How did evolution transition from blind to seeing through the first eye, the first photoreceptor, however imperfect at first? I address these questions through the study of novel complex traits in insects, such as the horns of beetles or the light-producing organs of fireflies. I have chosen this focus in part because the origin of novel traits constitutes one of the most fundamental questions in evolutionary biology which despite more than a century's worth of attention has largely withstood resolution through conventional approaches. Or put another way: while biologists have learned a great deal about how complex traits are modified over time, our understanding of how the same complex traits originated in the first place, how true innovation in evolution takes its baby steps, remains remarkably poor.

Over time, I realized that this poor understanding was due to a significant degree to the ways contemporary evolutionary biology conceptualizes the evolutionary process, and thus how its practitioners choose to study it. For example, while evo devo has provided critical new insights into the mechanisms of innovation in evolution, traditional evolutionary biology has so far largely resisted an expansion of evolutionary theory that would permit accommodation of these new insights. I discovered similar constellations in other areas of biology: the study of developmental plasticity, inheritance by means other than genes, the significance of symbiotic interactions, and the roles organisms play in actively constructing their own environments all share that they hold tremendous promise to improve evolutionary biology's explanatory power. Yet an extended, more inclusive evolutionary synthesis is only beginning to form. My first goal during my Guggenheim Fellowship is to further advance such a synthesis through both empirical work in my research group as well as conceptual collaborative efforts as part of an international team of scholars.

In addition to these interests, I am strongly and broadly invested in the many dimensions of the teaching and learning of science. With colleagues from Indiana University’s School of Education I engage in an NSF-funded project to investigate the teaching and learning of complex systems in young children. In collaboration with WonderLab, a museum for Science, Technology and Health, and a team of graduate students and postdoctoral researchers I develop and disseminate teaching modules in support of K-12 Science Teaching Standards in public schools. And in close partnership with regional educators and university staff I founded and now co-direct a pipeline of three interdependent summer science programs for underrepresented minorities, aimed at changing the faces of STEM disciplines, from Junior High School through college and beyond. My second goal during my Guggenheim Fellowship is to develop better tools and resources to enhance the training of the next generation of curious minds, assist teachers in effectively modeling scientific inquiry, and to better communicate the existential value of science to political representatives and the public.