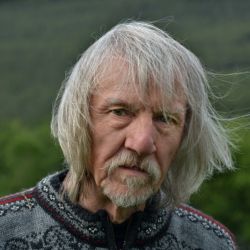 Arno Rafael Minkkinen is a Finnish-­‐American photographer, educator, curator, and writer with over 100 solo shows and nearly 200 group exhibitions in galleries and museums worldwide. He studied with Harry Callahan and Aaron Siskind at Rhode Island School of Design where he received his MFA in 1974. Six monographs have been published, which include: Waterline (Marval, Aperture, and Otava 1994), SAGA: The Journey of Arno Rafael Minkkinen, Thirty-­‐Five Years of Photographs (Chronicle Books, 2005), Homework: The Finnish Photographs, 1973 to 2008 (Like Publishing, Ltd, 2008), and Balanced Equation (Lodima Press, 2010). Minkkinen’s works are held in prominent museum collections such as the Georges Pompidou Center and Musée d’art moderne de la Ville de Paris, the Contemporary Art Museum Kiasma in Helsinki, the Museum of Modern Art in New York, and the Museum of Fine Arts Boston. He is Professor of Art at the University of Massachusetts Lowell and Docent at Aalto University of Art, Design, and Architecture in Helsinki. A 2015 John Simon Guggenheim Memorial Foundation Fellowship recipient, Minkkinen was honored with the 2013 Lucie Award for Achievement in Fine Art and the 2006 Finnish State Art Prize in Photography. In 1993 the Finnish government bestowed on him the Order of the Lion First Class medal. Most recently Minkkinen's photographs have been exhibited at the Lumière Brothers Center of Photography in Moscow, Images Festival in Vevey, Photography Oxford Festival in England, Galerie Camera Obscura in Paris, and at the Blomqvist Kunsthandel in Oslo.