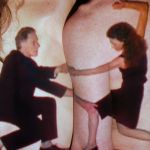 Ms. Packer and Mr. Bridgman are recipients of 2007 and 2008 National Endowment for the Arts grants and a 2007-08 New England Foundation for the Arts expeditions touring grant. They are also recipients of two choreography fellowships from the New York Foundation for the Arts, five "First Light" commissions from Dance Theater Workshop in New York City with funding from the Jerome Foundation, a Danspace Project Commissioning Initiative with support from the Joyce Mertz-Gilmore Foundation, and commissions from Dance New Amsterdam, the 92nd Street Y New Works in Dance, and The National Performance Network's Creation Fund. Bridgman/Packer Dance is a 2005 recipient of a Building Up Infrastructure Levels for Dance (BUILD) grant, a program of the New York Foundation for the Arts. Their international touring has been supported by USArtists International, the Performing Americas Project, the National Performance Network, and La Red de Promotores CentroAmericana y El Caribe.

Mr. Bridgman and Ms. Packer have been guest artists at over 150 universities, including New York University's Tisch School of the Arts, California Institute of the Arts, Ohio State University, Arizona State University, and the University of Utah. They have appeared abroad in Ireland, Scotland, Hungary, France, Switzerland, Germany, Japan, Singapore, China, and throughout Central America.

They were selected as 2005-06 Dance Theater Workshop Digital Fellows, a peer group of artists, researchers, and technologists whose work and process explores the hybrid spaces between the performing arts and technology. Their work was featured on Metroarts/Thirteen, WNET's cable arts program for the New York City metropolitan area, and they were featured in Dance Magazine's May 2006 issue on Great Partnerships.