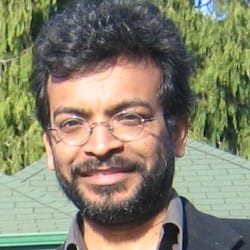 Arun Agrawal is widely known as one of the leading researchers in the field of environmental governance. Currently Professor and Associate Dean for Research in the School of Natural Resources and Environment, he received a B.A. in History from Delhi University (1983), an M.B.A. from the Indian Institute of Management (1985), and an M.A. and Ph.D. in Political Science from Duke University (1988, 1992). His dissertation was recognized in 1992 by the American Political Science Association as the best in the field of political economy that year. Before taking up his appointment at Michigan in 2003, Mr. Agrawal served as an assistant professor at the University of Florida (1993-96); an assistant, then associate, professor at Yale University (1996-2003), where he received the Arthur Greer Memorial Prize for junior faculty; and as a William Dawson Scholar and associate professor at McGill University (2002-03). Among his many publications are Greener Pastures: Politics, Markets, and Community among a Migrant Pastoral People (1999), Decentralization in Nepal: A Comparative Perspective (1999), coauthored by Charla Britt and K. Kanel; and Environmentality: Technologies of Government and Political Subjects (2005; rpt., 2006); over fifty articles in such important journals as Science, PNAS, World Development, Development and Change, and Anthropologie et Société; and chapters in eighteen anthologies. In addition, he was the invited editor of  “Indigenous Knowledge,” a special issue of International Social Science Journal (September 2002), and coeditor (with V. Saberwal) of the special issue of Nomadic Peoples entitled “The Future of Nomadic Agro-Pastoralism in South Asia” (2005). During his Guggenheim Fellowship term, he will be completing work on his book Poverty and Adaptation, which continues and expands on his research on adaptation to climate variability and change, examining the relationship between climate impacts and other social stresses based on data collected from south Asia and Africa, with the goal of documenting, understanding, and learning from past responses to climate impact and comparing and assessing their effectiveness.