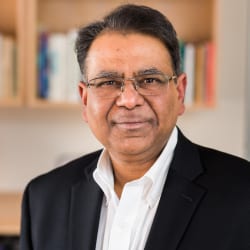 Arup K. Chakraborty is a scientist and engineer, whose career has been focused on work that brings together approaches from different disciplines to understand diverse basic phenomena and harnessing that knowledge toward practical ends. He is currently the Robert T. Haslam Professor of Chemical Engineering, and Professor of Physics, and Chemistry at MIT. He was the founding Director of MIT’s Institute for Medical Engineering and Science from February 2012 to January 2018. He is also a founding steering committee member of the Ragon Institute of MIT, MGH, and Harvard, and an Associate Member of the Broad Institute of MIT & Harvard. After obtaining his PhD in chemical engineering and postdoctoral studies, he joined the faculty at the University of California at Berkeley in December 1988. He rose through the ranks, and ultimately served as the Warren and Katherine Schlinger Distinguished Professor and Chair of Chemical Engineering, Professor of Chemistry, and Professor of Biophysics at Berkeley. In September 2005, Chakraborty moved to MIT.

After an early career in guiding the engineering of polymers and catalysts using quantum mechanical calculations, since 2000, Chakraborty’s work has focused on bringing together immunology and the physical and engineering sciences; more specifically, the intersection of statistical mechanics and immunology. His interests span T cell signaling, T cell development and repertoire, and a mechanistic understanding of HIV evolution, antibody evolution, and vaccine design. Chakraborty’s work at the intersection of disciplines has been recognized by numerous honors, including the NIH Director’s Pioneer Award, the E.O. Lawrence Medal for Life Sciences from the US DOE, the Allan P. Colburn and Professional Progress awards from the AIChE, a Dreyfus Teacher-Scholar award, and a National Young investigator award. Chakraborty was elected a member of the National Academy of Sciences and the National Academy of Engineering for completely different bodies of work. He is also a member of the National Academy of Medicine, making him one of 21 individuals who are members of all three branches of the US National Academies. He is a Fellow of the American Academy of Arts & Sciences and the American Association for the Advancement of Science, and serves on the US Defense Science Board. Chakraborty has received four teaching awards at Berkeley and MIT.